Direction of forces acting on points A, B and C

Maybe more of a physics question but I got the tip to post here and see if someone can help me.

All I need is the direction in which the forces at points A, B and C would be pointing. From there i can do the calculations by myself.

Enclosed should be a sketch of my problem. 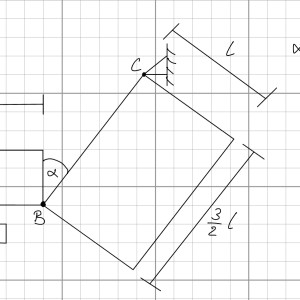 In this equilibrium position we can split the weight G in 2 weights of G/2 which we can attach elsewhere in the rectangle AB, in locations symmetric w.r.t. the middle of the rectangle ; for example, one in A and one in B.

Then the weight in B pulls on A and on C with forces F_AB and F_CB as for example explained in https://socratic.org/questions/a-particle-of-mass-10kg-is-suspended-by-two-strings-that-make-an-angle-of-30-and, or any other page you can find by googling "mass suspended on two strings".

So, to know the direction of the resulting force, we have to compute F_AB.

You see that it isn't obvious to know the exact direction of the force in A without making the calculation.
But you could maybe indicate schematically a direction as vectorial sum of an arrow "G/2" going down from A and an arrow "F_AB" going from A in direction AB (but not equal to the length of AB).